Living A Life After Stroke


This article is being reposted from the Eastern Graphic newspaper (peicanada.com) by Gary Gray aka garydotgray as he was interviewed by staff writer Jonathan Charlton 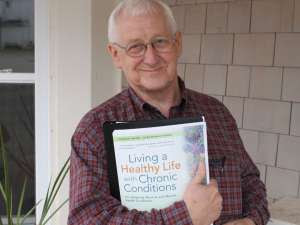 Optimism enables stroke victim to help others along the way

Since his stroke in 2002, Gary Gray of Montague has become a local leader in helping other stroke victims recover.
His road hasn’t been easy. "I knew I wouldn’t get my life before the stroke back, but I would get back as much as I could."
Mr Gray's first challenge was to accept what had happened, that things would be different.
"The first reaction is to be angry, to think 'I want my life back.'"
The left side of his body was affected and since he was left handed he had to relearn many basic skills such as how to write.
He had to work through what is called brain fog, where blood in his brain damaged cells and affected his ability to think clearly. There was also the physical fatigue.
But slowly, he began to recover.
"I would walk the length of the bedroom, living room and porch. I would do that every two hours."
Eventually he had built up enough stamina to go for walks outside.
Mr Gray sharpened his mental faculties by working on his computer.
"The first thing I had to do was answer about 800 emails that I’d collected," he laughs.
He then turned his attention to researching strokes online. He found strokenetwork.org, a stroke support group run by an American stroke victim which had about 3,000 members worldwide.
"We understood what the other ones were going through. So we could develop a better recovery because of that."
As Mr Gray recovered he outgrew the support group and turned his attention to his neighbourhood. Even as recently as a few years ago he says it was rare to see people walking down the street with a cane or ordering food at a restaurant with a speech impediment.
"Stroke survivors in that time were reclusive. Self-conscious about their condition."
So Mr Gray kept his ear to the ground and when he learned about other stroke victims he invited them to contact him and he offered support and encouragement.
"They began recognizing that I had a positive attitude and had recovered from my stroke."
It was that positive attitude that led to him to being asked three times to be a leader for a Living a Healthy Life, a peer support program invented at Stanford University and implemented by the provincial government. (People can register for Living a Healthy Life at 1-888-854-7244).
It teaches people with chronic health problems such as asthma or diabetes or are stroke or heart attack survivors how to work through their recoveries and maintain healthier lifestyles.
"Most of it I knew," Mr Gray says. "But this reinforced it, it was like an 'aha' moment."
"All of us living with chronic conditions, we have to deal with them now. They’re part of our lives."
Mr Gray found that people with different conditions went through some of the same symptoms, such as fatigue or anxiety, and could teach each other. While he had had success with his exercises, for example, others had tried to do too much too soon, didn’t achieve their goals and got discouraged.
He also liked the teamwork aspect - each person got a buddy that checked up on them, making sure they remembered meetings and asking how they were doing.
"If you have someone to remind you, that helps. You’re not alone anymore."
Still, he feels taking on a leadership role with that group isn’t his niche. He enjoys working as a midpoint between survivors and organizations and government. One thing he wants to check out is Bungalow Software, a series of computer programs developed by an American couple that help stroke victims overcome speech impediments. He knows at least two people in the area that could benefit.
It’s one way he’ll help other survivors, but he’s not worrying too much about the future.
"It’s hard to say. I don’t know. I’ll let it continue as it unfolds."

As a stroke survivor and after being directly involved  in this training as a participant, I believe that this program deserves being adopted as one piece in the puzzle of life after stroke. - Gary Gray

The reposting of this article is meant to promote education and awareness of living with chronic conditions as well as living life after stroke.

Click here to read the original article by Jonathan Charlton.
Posted by garydotgray at 7:20 AM

garydotgray
I am a thirteen year stroke survivor on my long journey back to recovering as many abilities as possible and finding my new normal.

Other Blogs About Stroke

Promote Your Page Too